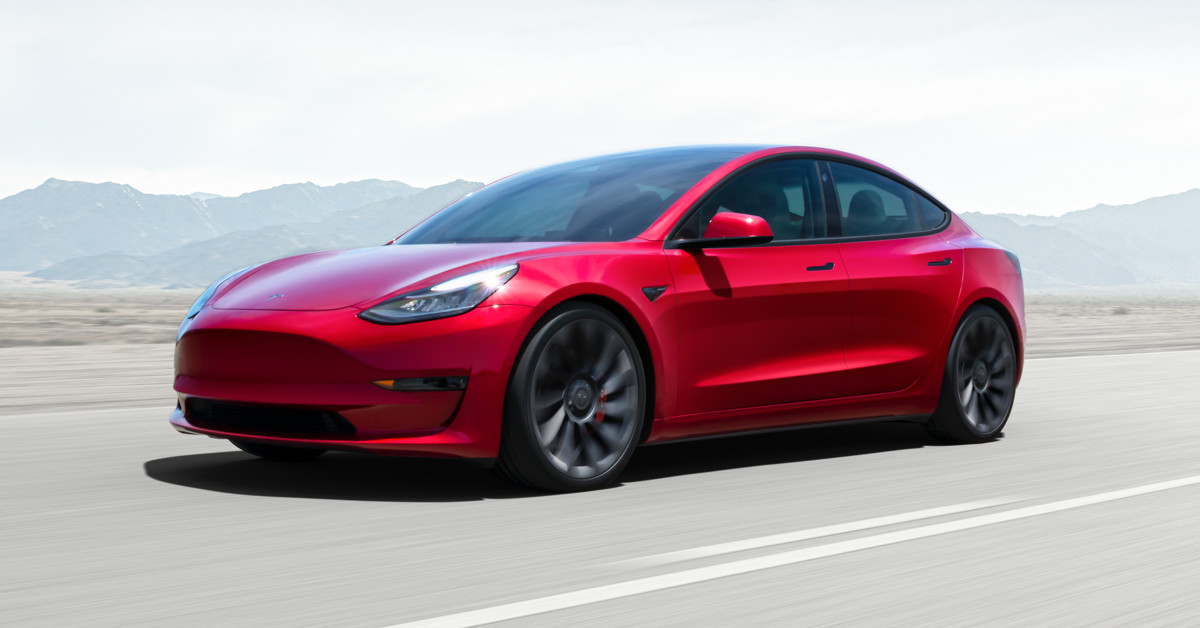 The tide has turned in the electrification of the German auto market, with plugin electric vehicles taking the majority of sales for the first time in December. Plugins took 55.4% of the month’s passenger auto sales, with full electrics taking a third (33.2%) and plugin hybrids taking over a fifth (22.2%). Plugless hybrids took 12.8%, leaving less than a third of sales for combustion-only autos (31.8%). 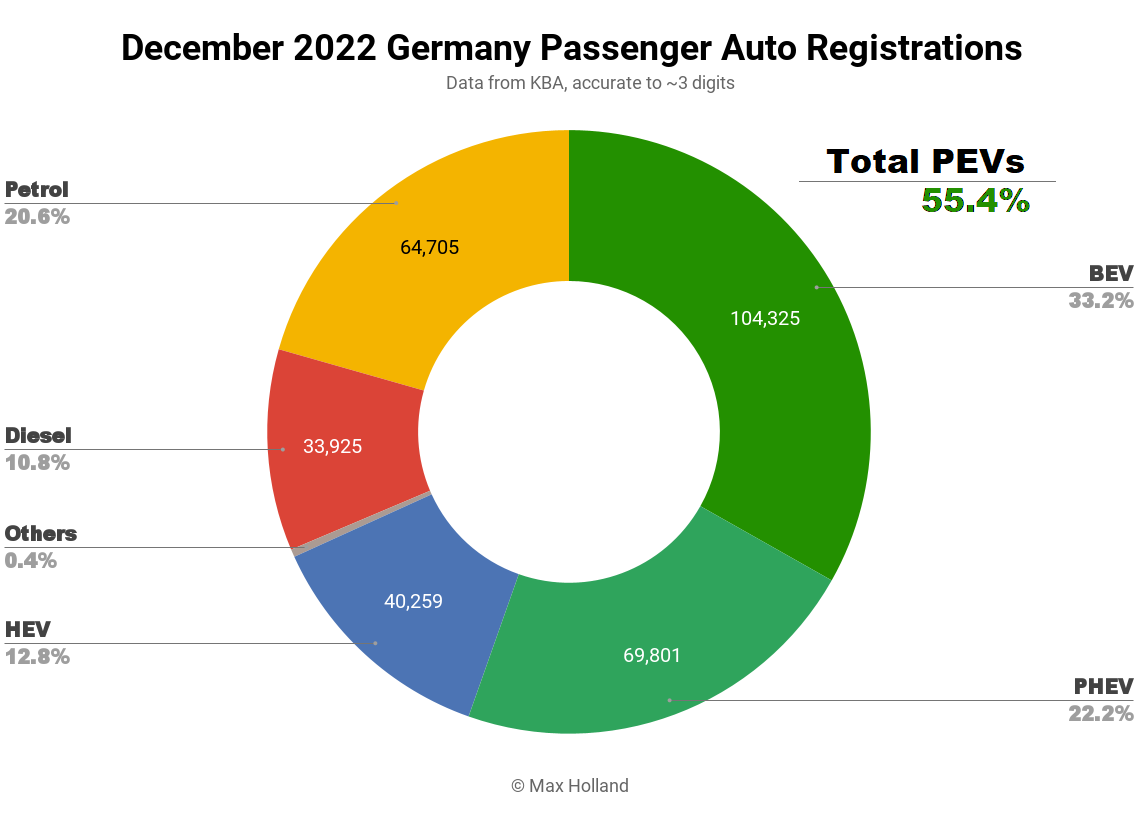 BEVs thus grew share from 13.6% to 17.7% YoY, a rate of 1.3×. This growth trajectory hypothetically trends for 50% BEV share in full year 2026, and close to 90% in 2028. Obviously, there are a lot of real-world variables which get in the way of hypothetical trajectories, but the current vector is decent.

Part of the influence on December’s very high plugin sales was a looming trimming of Germany’s plugin incentives starting on January 1st. BEVs’ government subsidies have just been cut from €6k to €4.5k for BEVs priced under €40k, and from €5k to €3k for BEVs priced  between €40k and €65k (nothing for vehicles priced above this). The thresholds and subsidy amounts will be further tightened from 2024. Government PHEV subsidies are cut entirely from January 1st (previously around €3.7k to €4.5k per vehicle).

Apart from some temporary pull-forward and rebound effects, these policy changes are unlikely to change the trajectory of the EV transition in Germany, except for denting PHEV sales a good bit. Recall though that Norway and Sweden have already largely moved on from the PHEV phase of the transition, with no major regrets.

Full year 2022 in Germany saw total volumes of BEVs reach 470,592 units. This is decent volume growth of 32.2% over full year 2021, especially in the context of a roughly flat overall auto market. 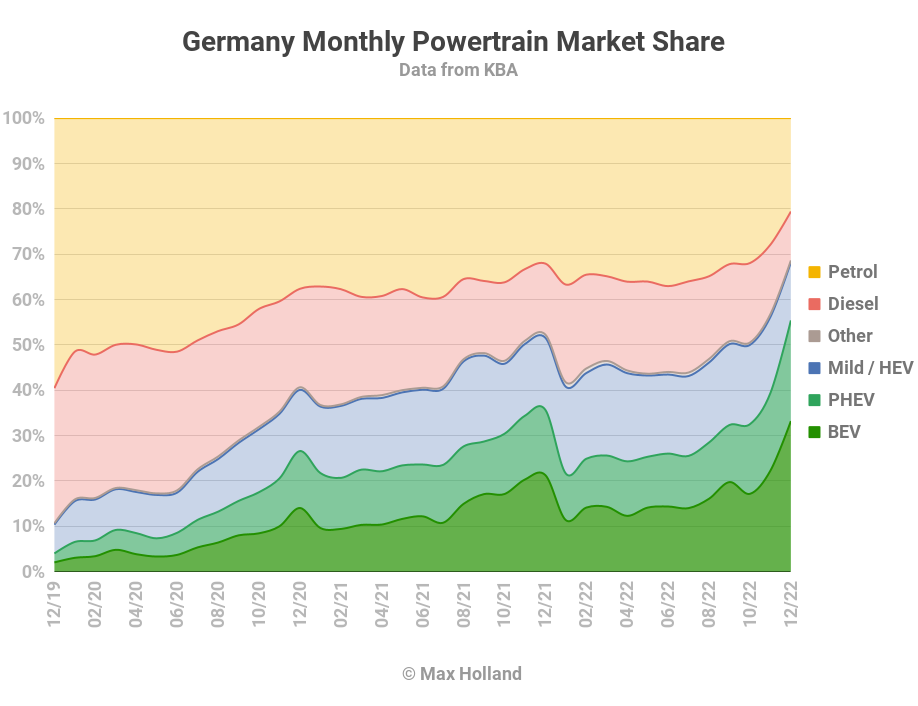 Tesla’s usual huge push in the last month of the year resulted in the Model 3 taking the overall bestseller spot in the German auto market in December.

The Tesla Model Y took second spot, with the Volkswagen ID.4/ID.5 coming in 3rd. Not to be outshone, the VW ID.3 made a notable record of its own — outselling its ICE older brother, the iconic VW Golf, for the first time. 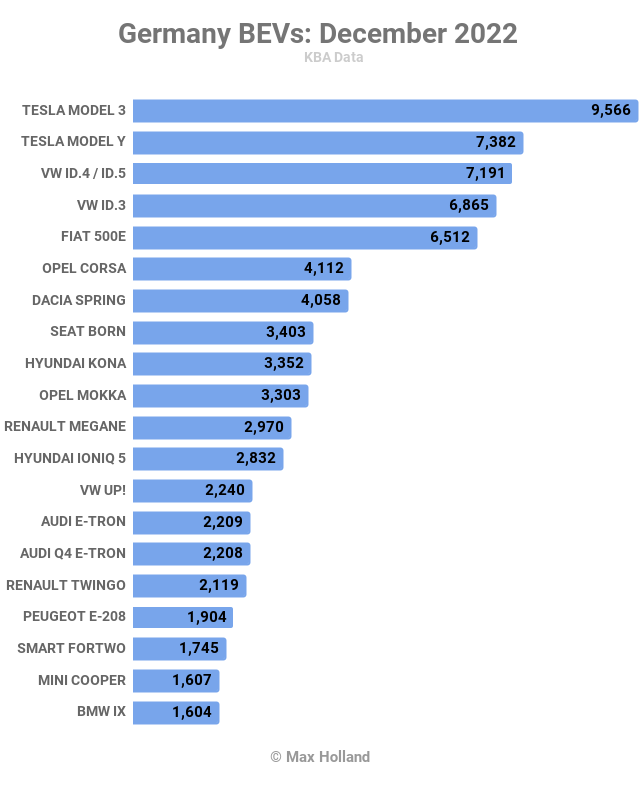 In fact, if we separate out autos by powertrain variant (e.g., the Fiat 500’s summed December sales were 70% the BEV version, and much of the remainder, the HEV version), most of December’s overall top 10 models-by-individual-powertrain were BEVs or PHEVs.

In the above list of December’s top 20 best selling BEVs, most are familiar faces. Are any new models appearing? Far outside the top 20, the new BMW iX1 had a strong second month on sale, registering 807 units (from a 77 unit debut in November). Could the iX1 become BMW’s bestselling BEV in the months ahead? It seems likely.

The Smart “#1”, having only shipped a few dozen units up until now, finally saw noticeable registration volume in December, with 192 units. Let’s see how far it can ramp from here.

A few existing BEV models saw updated versions arriving in December. The Audi Q8 e-tron — a technology update (and model name deconfliction) of the successful original Audi e-tron — started initial registrations in Germany with 21 units in December. It has better efficiency, a larger battery, more range (600 km WLTP on the sportback variant), and faster charging than the original e-tron, with a slight styling refresh also.

Similarly, the long-awaited refreshed versions of Tesla’s two big vehicles, the Model S and Model X — having initially appeared in small numbers in November — saw growing volumes in December (340 and 213 units respectively). Let’s see what the appetite is for these updated versions now that there are more competitors on the market.

Since Tesla (and some others) tend to bias deliveries towards the end of each quarter, let’s take a step back and look at the trailing 3-month performance of the top BEV models: 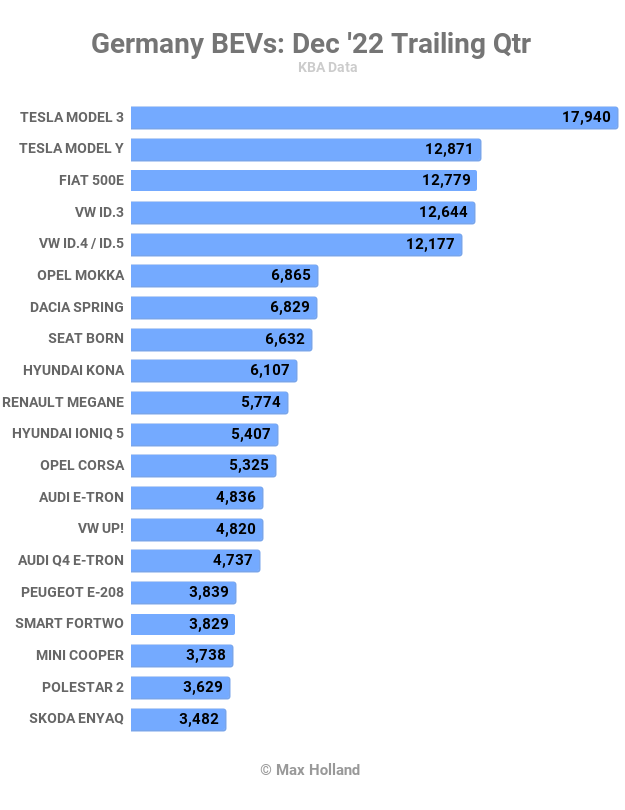 Here, the Model 3 still takes an easy lead, though the second spot is a close race. The Model Y, with Gigafactory Grünheide production now ramping quickly, has every chance to separate itself from the pack in 2023.

Overall, it’s good to see some strength-in-depth coming to Europe’s largest BEV market, with a decent variety of high-volume models now competing. There’s much more progress to be made, of course, especially at the affordable end of the market, where almost no models currently exist in Germany (or elsewhere in Europe). The Dacia Spring is the shining exception, but where are the other sub-€25,000 (or even sub-€20,000) BEVs?

Since we’re now in the new year, let’s look back on 2022’s full year bestselling BEVs: 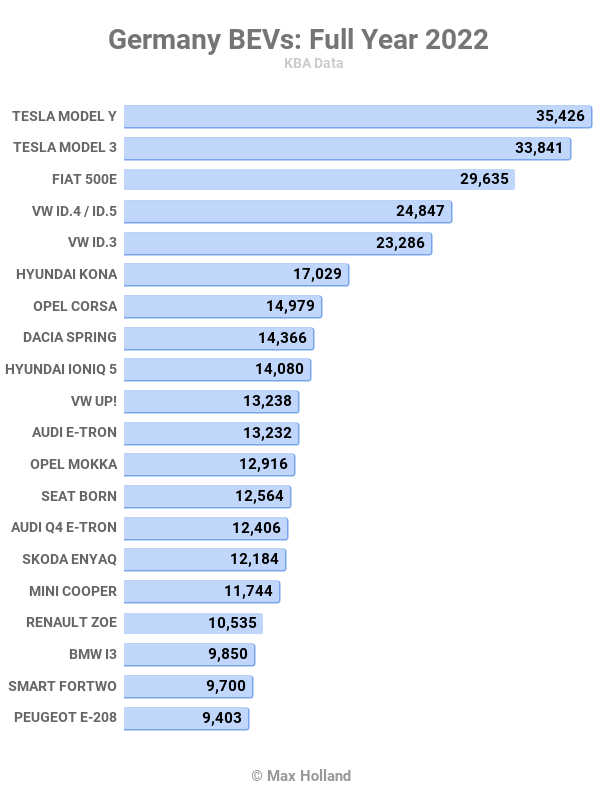 Again, Tesla’s top 2 dominate the chart. At these volumes, the Teslas are in fact the #9 and #10 overall bestselling vehicles for 2022 in Germany.

Now, with local production ramping, if Tesla is able to hit huge volumes, the Model Y could conceivably enter Germany’s top 5 “overall” in 2023, ahead of the Ford Kuga (#5) and BMW 3 Series (#6). After all, the Model Y has just won the #3 position in the UK market for the full year 2022 (report coming soon).

German consumers are arguably less Tesla-fanatical than UK folks, and to climb as high as #3 in Germany would likely need an altogether more affordable base model than the €54,000 current entry price. Perhaps a variant starting in the mid-forty-thousand euro range (around where the VW ID.4 starts) might do the trick. But until Tesla has more production capacity than demand, there is little motivation to offer a more affordable variant.

Finally, let’s have a look at which auto manufacturing groups are leading in BEV sales volume in Europe’s largest auto market. Here’s the trailing 3-month view: 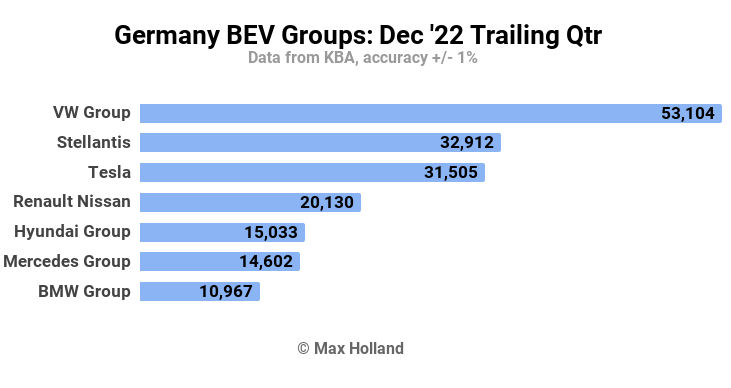 There have been a few changes since Q3. Volkswagen Group is still top, but with more than 2× the volume than it delivered in Q3. Tesla and Stellantis have switched places, thanks to the latter growing sales more rapidly compared to Q3.

Here is the full year manufacturing group picture for Germany:

As we can see, the ranking is exactly the same as the Q4 table above, and even the relative weightings are mostly similar. Note that — for the top 4 groups — between 42% and 45% of their total annual volume was delivered in the final quarter of the year!

Taking a step back, it’s worth remembering that the results in a single market — even one as dominant as Germany — are influenced by decisions over how to allocate the limited production of BEVs across different European markets, in all of which BEV demand currently outstrips supply. Often, local brands favour allocating units to their home market (Volvo in Sweden, VW in Germany, Renault and Peugeot in France). We will wait to see the summed Europe market report later this month to see who the overall volume leaders are in the European region as a whole.

It is good to see Europe’s largest auto market crossing the 50% barrier in plugin adoption. Yes, this is “only” in the peak month of the year, and yes, 40% of that plugin demand was for PHEVs, which are “only” a transition technology. But this is a milestone worth celebrating, nonetheless.

The future outlook for the German industry is less certain. Germany is still braced for a mild recession in 2023, and particularly affected will be industries with high energy inputs, including the auto industry and many of its suppliers. Highly energy intensive auto supply chains include steel, aluminium, rubber, plastics, and glass, amongst others.

Europe’s industries, including Germany’s crucial auto industry, will face these cost increases, much more so than industrial competitors in all other regions of the world where energy inflation is more modest, and the economic outlook is less unhealthy. This being the case, it is hard to predict the short-to-medium-term future for Germany’s auto industry.

However, in terms of the EV transition viewed purely from the consumer market perspective, the fundamental economic proposition remains unchanged, with long-term costs of ownership, and residual values, strongly favouring BEVs over traditional ICE vehicles.

We see this consumer sentiment reflected in December’s market share, strong relative demand for plugins, and especially BEVs. This will surely continue. What’s less certain is how effectively the industry can continue to transition from ICE to EV, to keep up with this demand, and whether the macroeconomic conditions in Europe will support consumers continuing to make big purchases like autos.

What are your thoughts about Germany’s EV transition, and also the economic prospects for its auto industry? Please jump into the comments below to share your perspective.