EV sales in Norway explode ahead of policy changes 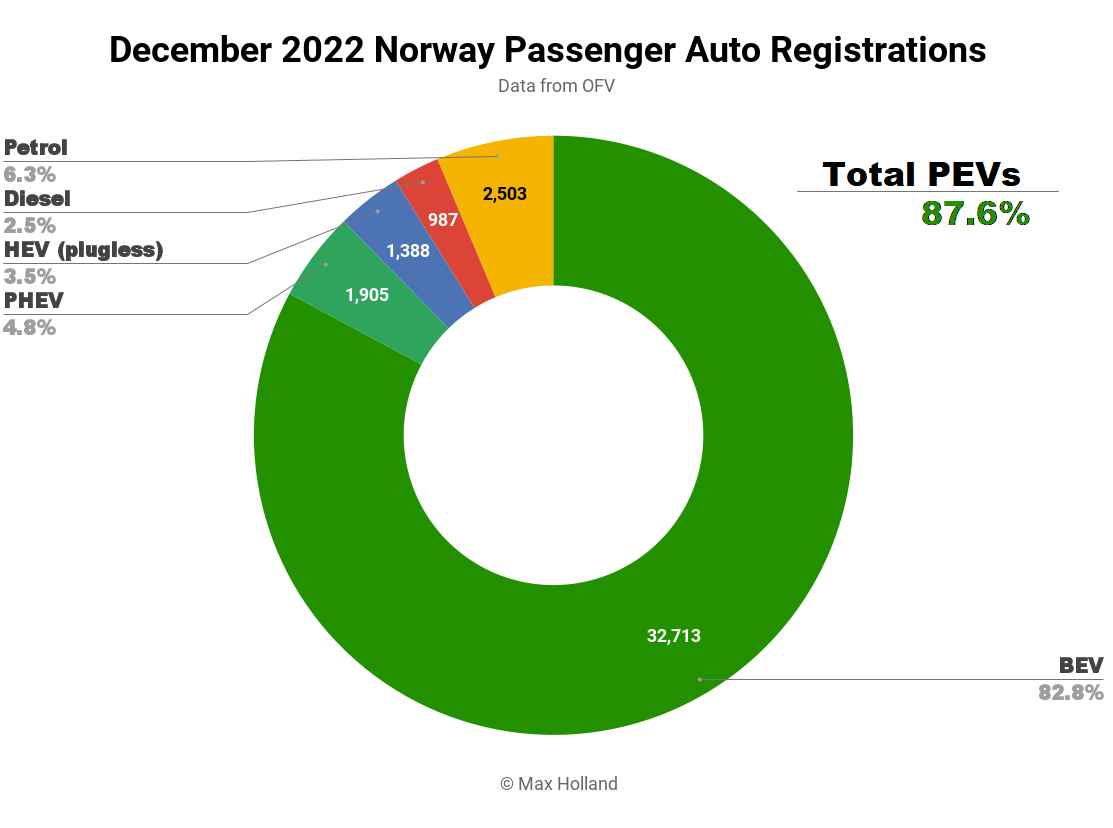 December’s combined plugin share of 87.6% was completely dominated by full electrics (BEVs), taking 82.8% share. Plugin hybrids (PHEVs) took just 4.8% share, their lowest for many years. The respective shares a year ago were 67.1% and 22.9%.

PHEV’s relatively low share was not due to their fall in volume, rather that the volume of BEVs and petrol vehicles were much higher than usual. December’s overall auto market volume of 39,497 units was almost double the December volume of 2021 and 2020 (both around 20,570 units), and 2.5x times the average monthly volume seen in 2022. BEVs alone sold 32.713 units, over twice their previous record volume. Petrol vehicle volumes were 4x to 5x recent seasonal norms.  The reason for the high volume of these two powertrains was pull-forward sales, ahead of looming tax changes in January 2023.

Pull forward ahead of tax changes

Adding together the new weight tax, and the new VAT tax, from 1st of January, a Tesla Model Y Performance faces additional cost of around €1,850 (for weight) plus €2,350 (for VAT). So €4,100 more overall, compared to its cost in December. For a Mercedes EQC, the added cost of these two new taxes is around €7,050.

Even for a smaller, more modestly priced BEV like the Volkswagen ID.3 Pro Life (58 kWh), although it is below the VAT threshold, the weight tax still amounts to a cost increase to the buyer of around €1,530. Norway’s popular BEVs (Tesla Model Y, VW ID.4, Skoda Enyaq, Volvo XC40, etc.) are now seeing increased costs in the range of €2,500 to €4,000.

Since consumers naturally wanted to try to avoid these effective cost increases from January 1st, there was a huge surge of pull-forward sales in December (and to a lesser extent in November), leading to the record BEV volumes.

Furthermore, there are also increased taxes for combustion vehicles, most notably related to CO2 emissions. These also amount to effective increases in cost of several thousand Euros per vehicle, especially for larger vehicles and/or those with bigger engines. Petrol vehicles are particularly affected, thus they also saw a rush of pull-forward sales, before the January 1st policy change, gaining 4x or 5x their typical volumes. 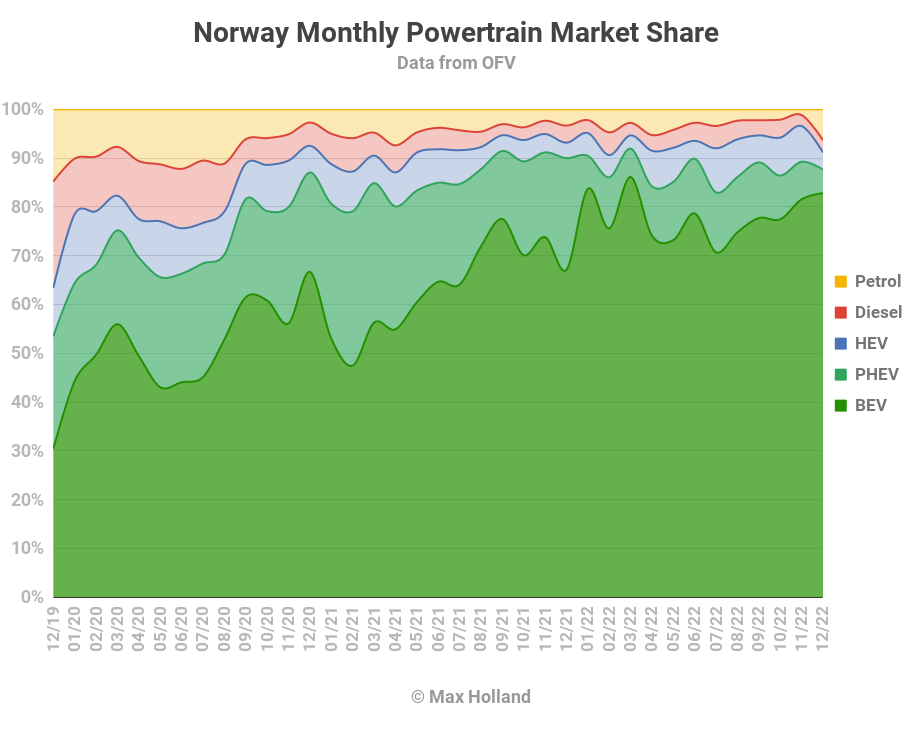 The isolated powertrain volume chart below illustrates the abnormal volumes of December’s BEVs, and petrol vehicles. We can expect patterns to return closer to the recent balance in a few months from now. January and February will likely show some negative rebound effects for BEVs and petrols: 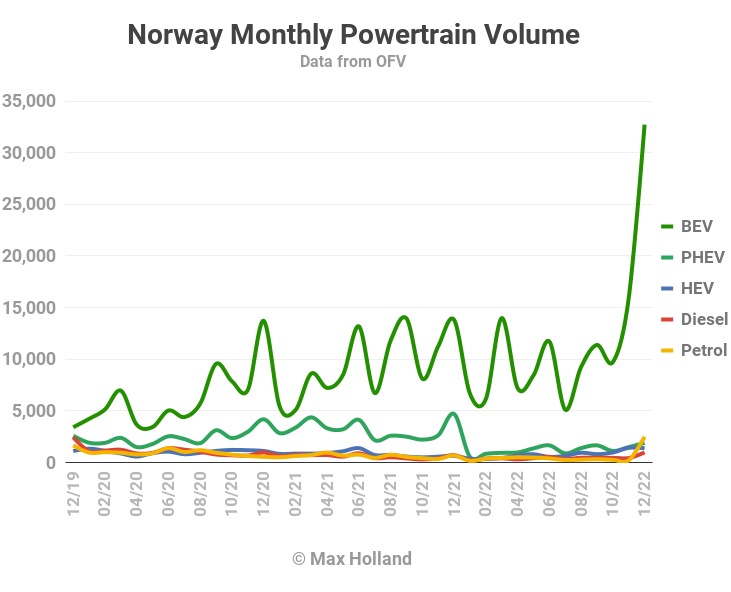 Tesla was able to capitalise on the surge in BEV demand, supplying a record 4,518 Model Y units in December. This is still below the 5,315 monthly volume record of the Tesla Model 3, set at its debut in March 2019.

The Volkswagen ID.4, and Volvo XC40, took the #2 and #3 spots, far off from the Model Y, but still well above their typical monthly volumes. 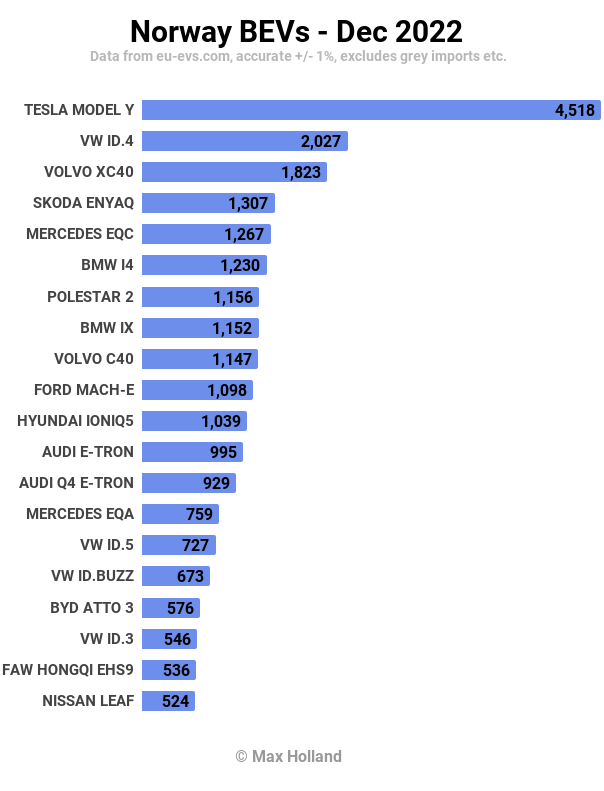 In terms of significant changes, the Mercedes EQC claimed its highest ever ranking, thanks to over 4x its more typical monthly volumes, due to the looming tax changes noted above. Likewise, the Ford Mustang Mach-E, most variants of which are around 600,000 NOK, saw a 5.5x jump in volume, gaining 10th spot.

Similar magnitudes of pull-forward amplification were seen for the BMW iX, and i4, the Mercedes EQA, and EQE, the Hongqi E-HS8, and the Porsche Taycan.

In terms of new arrivals, the most important right now is the new BYD Atto 3, which brings a fresh value proposition to the compact/mid SUV segment. From a handful of initial deliveries in November, it jumped up to 576 units in December, ranking 17th for the month. If it does well overall in Europe (which it already looks like doing), BYD will certainly later make available the smaller Dolphin hatchback also, which will be even more of a game changer.

Other new BEVs appearing in December included the Voyah Free, straight in at 385 units. The Free is a large SUV, similar in size to the Nio ES8, or BYD Tang, with premium features, for a competitive price.

At much smaller volumes, the new DFK Seres 3 launched in Norway, as did the new JAC ES4. Both are compact/mid SUVs with decent value.

The new BYD Han, a premium full sized sedan, scored decent volumes in just its second month on sale, with 294 units. Meanwhile, a familiar face in the same segment (though much higher priced) the Tesla Model S, finally made a return to Norway, after a two year absence (as did its sibling the Model X). Both scored 382 units in December.

Now that there is a lot more competition in the premium full sized market, it will be interesting to see how well the two big Teslas succeed in their European renaissance. Once long-standing orders have been fulfilled, will they sustain volume anywhere near their previous 300-400 units per month? With much higher starting prices, plus the new VAT rates, it seems unlikely, but let’s wait and see.

Let’s now step back and look at the trailing 3-month rankings: 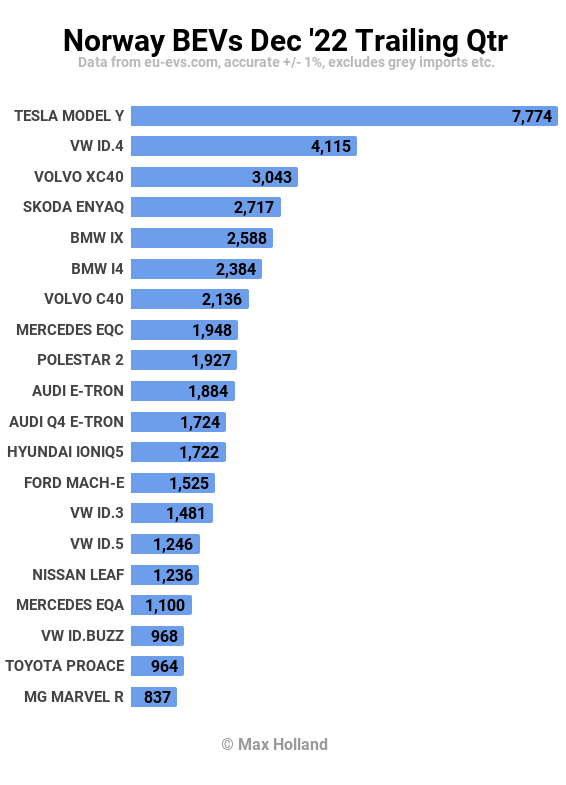 Sales of the larger, heavier models, priced above 500,000 NOK, have been juiced in November and December by the pull-forward discussed above. As this is a one-off situation, there’s not much point in over-analysing the temporary changes in ranking that have resulted. Let’s return to this in the Spring when things have settled down again.

The Volvo XC40 has stepped up in the past few months, taking 3rd in the above rankings. It’s good to see the Volvo and Polestar brands get back to strength in Norway, as they have in neighbouring Sweden. Let’s see if they can sustain this renewed resolve over an extended period.

What has changed since a year ago?

Below are Norway’s top 10 favourite BEVs for the full year 2022: 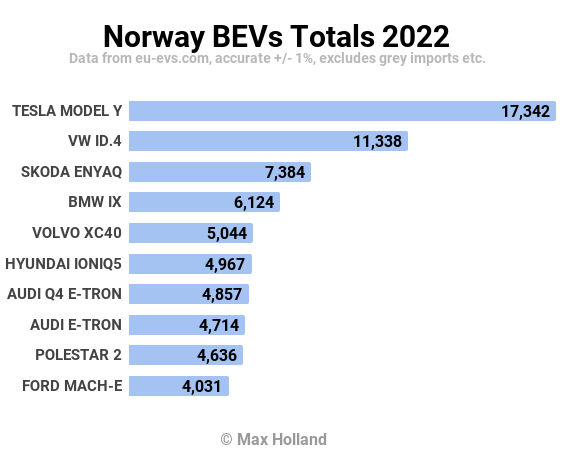 The BMW iX has come from nowhere to take #5 spot, likewise its sibling i4 has taken #11, just outside the above list.

Other YoY changes are less dramatic, more of a shuffling of places.

Will 2023 see more market innovation, and the arrival of disruptive new BEV models? We will have to wait and see.

The policy changes described at length above have shaped the last couple of months of the Norwegian auto market, but are not indicative of longer term trends.

In the bigger picture, every powertrain other than BEVs is now in decline, even PHEVs.

The task for converting the remaining 10% to 15% of auto sales over to BEV requires a variety of more affordable models, better charging infrastructure, and a few remaining un-met vehicle niches to be filled. 2023 will make progress in this regard, but it remains to be seen how much.

I expect it will be another couple of years before there is a broad enough variety of affordable BEV models to get consistently above 95% BEV share.

What are your thoughts on Norway’s pathway along the EV transition? What kinds of as yet unmet niches still need to be filled? Please let us know in the comment below.