Researchers at the Karlsruhe Institute of Technology (KIT)

Lithium metal is one of the best candidates to replace graphite as an anode material thanks to its high theoretical capacity. The problem is that batteries using lithium metal anodes currently have poor cycle life.

However, thanks to a new non-flammable dual-anion ionic liquid electrolyte this could soon change.

Researchers at the Karlsruhe Institute of Technology (KIT) and the Helmholtz Institute Ulm – Electrochemical Energy Storage (HIU) have now found a solution. As you report in Joule magazine, you are using a promising new combination of materials. They use a low-cobalt, nickel-rich layered cathode (NCM88). This offers a high energy density. With the commonly used commercially available organic electrolyte (LP30), however, the stability leaves a lot to be desired. The storage capacity decreases as the number of charging cycles increases.

Why this is so, explains Professor Stefano Passerini, Director of the HIU and head of the battery electrochemistry research group: “In the LP30 electrolyte, particle cracks occur on the cathode. The electrolyte reacts within these cracks and destroys the structure. In addition, a thick, moss-like lithium-containing layer forms on the cathode. ”The researchers therefore used a non-volatile, non-flammable ionic liquid electrolyte with two anions (ILE) instead. “With the help of the ILE, the structural changes in the nickel-rich cathode can be significantly reduced,” reports Dr. Guk-Tae Kim from the Battery Electrochemistry Research Group at HIU.

The results: With the cathode NCM88 and the electrolyte ILE, the lithium metal battery achieves an energy density of 560 watt hours per kilogram (Wh / kg). It initially has a storage capacity of 214 mAh per gram (mAh / g); 88 percent of the capacity is retained over 1,000 charging cycles. The Coulomb efficiency, which indicates the ratio between withdrawn and supplied capacity, averages 99.94 percent.

Since the presented battery is also characterized by a high level of safety, the researchers from Karlsruhe and Ulm have thus taken an important step on the way to carbon-neutral mobility. 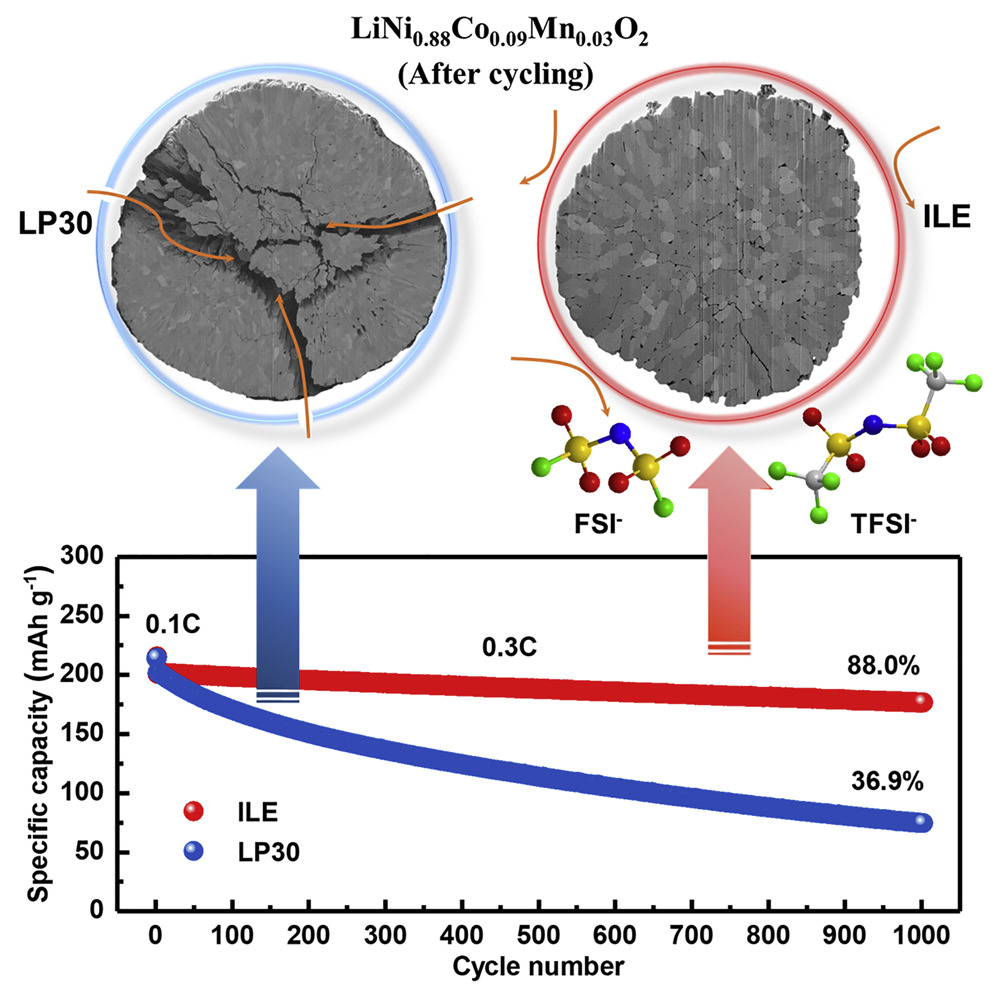 Initially I didn’t notice that the energy density figure of 560 Wh/kg advertised on the press release only considered the weight of the active material (cathode and anode), so thanks Andrés for the heads up!

The research paper clarifies it.

The resulting specific energy based on the overall (anode + cathode) active material weights is calculated to be 564 Wh kg−1 at 0.1C, and 488 Wh kg−1 at 0.5C using the thin Li electrode.

Thanks for the heads up Andrés, you’re right.

The energy density figure on the press release only considered the weight of the active material.

English please, so others can also learn something.

You can use google translate if you don’t understand a language.. 🙂

Toyota, Hyundai, BMW, Benz are all joining hydrogen wave.
Let that fuel also come in. Still the FCEV powered by motor is much more efficient than ICE car.

I don’t know, I think automakers and fossil companies are still trying to get governments to waste money subsidizing H2 for transport, just so they can delay EVs and so they can scam some extra public money. That’s money that could be used for actually reducing emissions. FCEVs will never reduce emissions an appreciable amount, because they’ll never sell more than a negligible number of them.

no one will ever buy them because they’re expensive and there’s nowhere to fill them.

Dear Friend Sola: Speaker/writer of every language needs to be respected and given a chance to post in their language.

Model 3 with LFP comes to North America. Seems LFP supply is plenty while NCA is short.
Abundant supply of Iron & Phosphate could tip the scales in favor of LFP.

with BYD’s new models coming out and the MIC LFP model 3s, it appears there’s soon going to be a tidal wave of LFP EV sales. 👏👏👏

This huge difference on energy density between 0.1C and 0.5C does not sound promising. If density follows the trend, then 1C discharge would mean probably around 400Wh/kg with an active material only. Count in the casing, which would add around 15-25% of the mass and the density drops to around 300-350wh/kg. Not great, not terrible, but I’d expect more after all. Counting from 2012 I think we only gained around 20% density since the first 18650 used in Tesla Model S? We are still struggling to pass the 300wh/kg threshold, and this doesn’t make me enthusiastic at all.

If I remember correctly the first Model Ss sold had a 40 kWh battery, but soon were upgraded to 60. Energy density has more than doubled in the last decade. That is a >100% gain.
As commercial batteries are the result of many incremental improvements spanning oftentimes decades to come by, I think that here we are one step closer to a commercially viable lithium metal battery but still not in the finish lane. I think it is great news and the people involved in it are badass. Well done!

Great for the clean air of Liverpool. Not fan of H2 though, quite sure it is not the fastest way to reduce CO2 emissions (less energy efficient than batteries, ties with oil and gas companies,…)

Green H2 is fine, Blue is not…

They built in the larger and heavier battery instead of the 40 kwh, so what? And no, there was no 100% gain in Tesla NCA cells, they have started at about 210 wh/kg and now reached around 260 in general production, with ~300wh/kg in a few years.
https://cleantechnica.com/2020/02/19/bloombergnef-lithium-ion-battery-cell-densities-have-almost-tripled-since-2010/ Even this article is misleading since LMO were never used in EVs. If Tesla did use 300wh/kg NCA+ cells, then they could increase their pack capacity by about 20% with no change in size or weight, which did not happen during last 3 years.

The first generation of batteries in the Nissan Leaf were LMO made by AESC and Mitsubishi used GS Yuasa batteries with hybrid NCM/LMO cathode.

480.506 plugin vehicles were sold worldwide in 2021-07, its a record high for July which is a 1st month of a quarter (weak month since Tesla vehicle are on transit). YTD sales tops 3 million in just 7 months. Only 3,1 million vehicles were sold in whole of last year.

With many new models being launched in next few months, global plugin sales could increase drastically.

This is so great to finally see it happening.