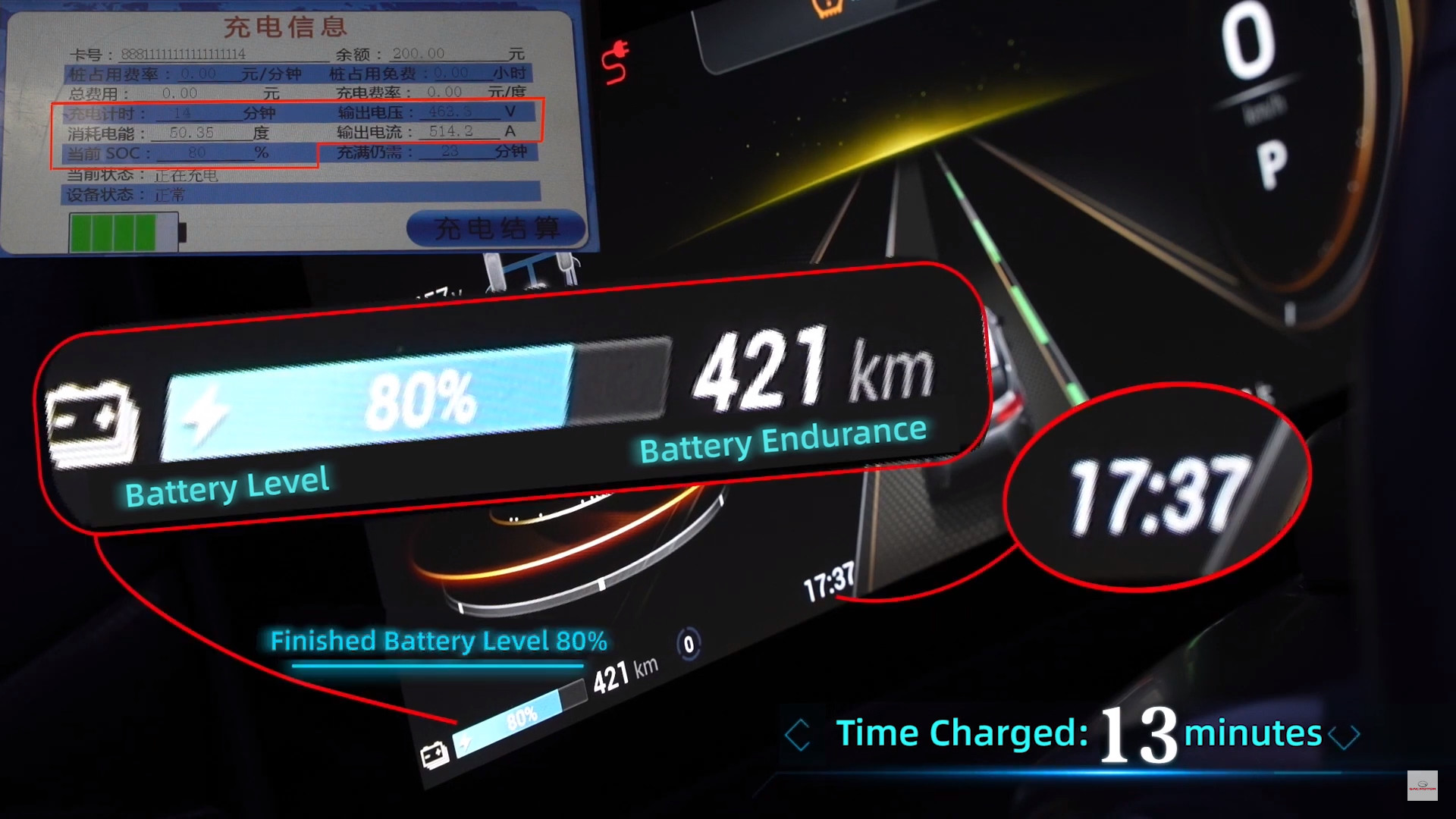 After many years of waiting, soon electric cars will finally have batteries with silicon anodes, which deliver higher energy density and faster charging when compared to common graphite anodes.

As part of the neutron star strategy, Tech Day 2021 also saw the unveiling of GAC’s sponge silicon electrode technology. After years of research, GAC has overcome problems associated with silicon in larger batteries, using independently developed and patented “sponge silicon negative plate battery technology”: this makes the silicon negative sheet inside the battery as soft and elastic as sponge, strengthening it against wear and tear from charging and giving it a larger storage capacity. The volume and weight of a single battery can be reduced by 20% and 14% respectively.

Superfast charging technology also displayed at Tech Day 2021 can achieve a full charge of an electric car’s battery from 0% to 80% in just 16 minutes, roughly the same amount of time it takes for a traditional refuel. This paints an extremely bright future for electric vehicles.

Anyway, Tesla and Volkswagen also announced that they plan to use silicon anodes in their EV batteries soon but it seems that Chinese automakers will get there first (already this year).

As for battery cell makers, Chinese companies also lead the way with Guoxuan and Farasis very close to mass produce this kind of batteries.

Remember that not only NCM batteries can use silicon anodes, cobalt-free chemistries such as LFP (LiFePO4) and LNMO can also take advantage from this breakthrough.

Moreover, with BEVs (Battery Electric Vehicles) that support this kind of fast charging (3C or more), who needs fuel cell electric vehicles (FCEVs)? Toyota are you there???

Imagine a Renault ZOE with a 70 kWh battery that can fast charge at 210 kW in under 20 minutes. This is possible with the recently announced silicon anode batteries. ICE age can be over if policy makers and automakers wish so.

wow, this is really encouraging that they’re testing this tech now in EVs, rather than in a lab. It makes me think that it’s commercially viable soon. Did I read the charging screen in the video correctly? was it really running at over 500Amps?

“Imagine a Renault ZOE with a 70 kWh battery that can fast charge at 210 kW in under 20 minutes.”

The only data points I’d like to see are how much do these silicon anodes affect the price of the batteries (is the material expensive or hard to manufacture)? And what is the cycle life of GAC’s version of the silicon anodes?

I also wonder what the cost is, yet considering this is a Chinese automaker I don’t think they would mass produce it if it was expensive.

Thanks for the link. Looks interesting. It’ll be very interesting to see which anode technology wins out. For example, this Swedish research sounds interesting, but is the silicon’s resiliency just a matter of particle size? I don’t really know much about it, but I would guess that some of these technologies have technical roadblocks to achieving acceptable cycle life. Such as a scenario where the silicon needs to be mixed with some compound to keep it more stable, but that compound won’t work in an aerogel.

HOwever, I think you’re right that Chinese automakers wouldn’t be demonstrating them in a vehicle if it wasn’t close to cost competitive mass production and cycle life.

Great development. 10-80% in under 15 minutes is a new record, and great, assuming that the cycle life is decent. Do they give any hard data for Wh/kg (or Wh/l) at the pack level?

Great news & delighted to see it, but we might have a “Bump in the road”
Lithium shortage may unplug electric car revolution (msn.com)

Maybe, maybe not… some anxiety (and FUD) about lithium supply is probably a good way to get the big auto makers to pay more attention to forward looking investments.

Those are already very decent at the cell level, thanks Pedro.

At the pack level the energy density should be around 70 % of that value (230 Wh/kg), unless they adopt CTP (cell-to-pack) technology with large prismatic cells, then the GCTPR (gravimetric cell-to-pack ratio) will be higher (above 85 %).

0-80% in 16 minutes is impressive.
Prismatic vs cylindrical
NCx vs LFP
Graphite vs silicon

its a competition on multiple fronts.
toyota will still insist that refueling with hydrogen will take only 8 minutes, grudgingly they are revealing bev with 0 interest in selling them. but they sell a whole lot of fhev (full hybrids) and are making lot of money. their next move is on phev (plugin hybrids). at least they do this, honda does not even go into fhev/phev.

Yeah, the problem for anything other than BEV is that you cannot make 80% to 90% of your refills “for no extra effort” when parked for a few hours at home or work or similar. No highly flammable substance will ever be able to compete with that.

Exciting LIB news announcement. If acceptable life-cycle and cost effective at scale, the sponge silicone technology will be utilized by most major LIB cell producers once anode material producers achieve mass production. It will be interesting to see what CATL does.

In a previous announcement GAC was already talking about 6C for 2023/4, based on the 900V Chaojie protocol.

Hi Leo, yes you’re right they are almost as fast as the 3C version shown on the video.

“Go from 10% to 80% SOC in just 18 minutes when connected to an ultra-fast charger! Just stop for a coffee and plug in to add range faster than you ever thought possible.”

“In terms of super fast charging, GAC Group will launch two versions of 6C-500km and 3C-500km fast charging batteries to meet the fast charging needs of different users. They will be installed on GAC AION V for the first time in September this year.”

Unfortunately, I just noticed that this first generation of fast charging cells from GAC Motor will have an energy density of 280 Wh/kg. Only in next generation they’ll reach 315 Wh/kg.

Maybe the superfast charging is related to the graphene battery they are developing ?
They seemed to have announced a 8 min 80% charging time for that one, in January, as coming already in the Aion V to be produced from September 2021, but maybe they had to adjust it a bit, and the 8 min – 6C version will come later, as mentioned in the comment above by Leo B (2023-24) ?
https://www.gac-motor.com/Home/News/content/id/166

Current Li-S cells don’t have sufficient cycle lifes for use in cars.

Incredible to remember that the Zoe Q90 was technically a 2C car. But really only technically.

Great to see this developments. Hopefully go into production cars soon. Technically nothing stops the BEV to completely overcome ICE. And this is also good news for energy intensive vehicles like vans, trucks and machinery.