LG Chem plans to build a new factory in Europe 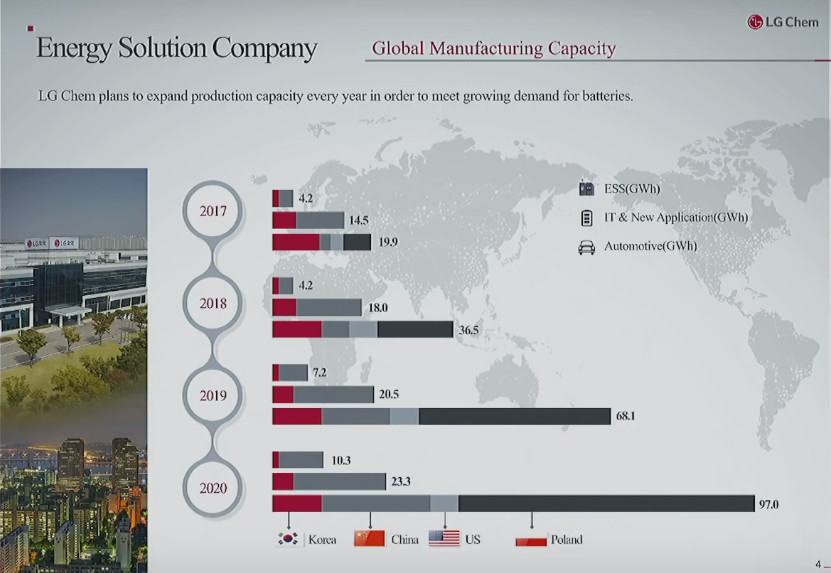 According to Reuters, the South Korean battery cell maker LG Chem is now looking for a site to build a new factory in Europe.

LG Chem is looking for a site to build a new factory in Europe, as it plans to more than double its global car battery capacity to 260 gigawatt hours (GWh) by 2023, from 120 GWh this year.

LG Chem already has two battery cell plants in Europe and both are in Poland where most of LG Chem’s global battery cell production is located. If production capacity is expanded at its already operating plants, LG Chem can produce 120 GWh annually and this would be enough to assemble more than 2 million (2.400.000) battery packs with 50 kWh each.

With a third battery cell plant in Europe LG Chem expects to reach a global annual production capacity of 260 GWh by 2023. This would be enough to produce more than 5 million (5.200.000) battery packs with 50 kWh each.

Anyway, I wonder how much of that production capacity will be allocated to produce cobalt-free battery cells. LG Chem has been experimenting with the LNMO chemistry for a while and I think that this will be the cobalt-free chemistry that South Korean battery cell makers will push for, leaving LFP and LFMP for the Chinese makers.

Meanwhile, BYD is already mass-producing its LFP (LiFePO4) cobalt-free Blade Batteries for its own electric cars. Currently with an annual production capacity of 20 GWh, that will be expanded to 40 GWh by next year and to 100 GWh by 2022.