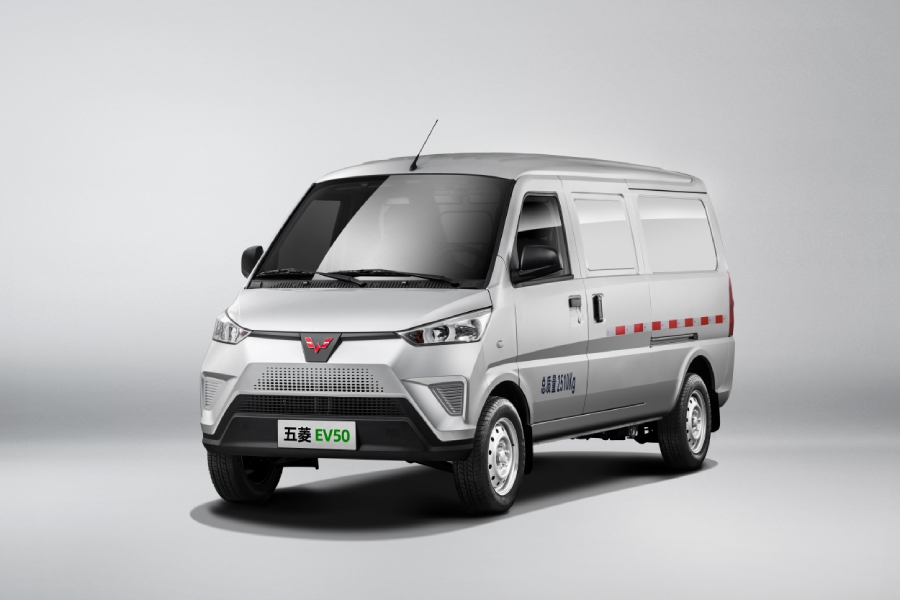 The Wuling EV50 and BYD V3 are two new electric vans that share the same body, but they have different cobalt-free LFP batteries.

Let’s start with the Wuling EV50 that gets a 60 kW motor and two batteries options.

Wuling says that the LFP battery packs will last for at least 2 million kilometres and the starting price for the Wuling EV50 is 108.000 yuan (13.596 euros).

However, the BYD V3 is the best version, with a more powerful motor and a more energy dense BYD Blade Battery.

In a more realistic test cycle such as the WLTP, the range would be around 245 km (152 miles), which is pretty acceptable for an electric cargo van. This electric van seems perfect for postal services.

€ 13.596 for 245 km WLTP is very affordable. 2 million km life is another excellent feature.
But Van sales are decreasing in china, ideally they should have fixed regular doors and called it crossover.

Is the Wuling using its own batteries or CATL or some other supplier. CTP batteries without modules is another great feature gaining steam.

@Pedro Lima: Why not you use the € symbol for prices. It will be more nicer.

I don’t know who supplies the battery packs, but my guess is Guoxuan.

“The euro sign (€) is reserved for use in graphics.”

The 41,86 kWh pack seems to be used by Changan products as well. There the information is:

Reply
Leo B
Reply to  Leo B

For the 43,2 kWh pack I find Henan Penghui Power Supply as pack supplier. I suspect the English name is “Great Power Group”.

Is Elon Musk unaware that safety organisms and governments may prohibit the use of battery packs that are relying on Li-ion cells that are not individually monitored in pressure, temperature, voltage, and current? Certainly not.

1p/ and 2p/ packs featuring no Li-ion cell individualization will remain tolerated for building inexpensive low power and medium power battery packs for power tools, assisted bikes, motorbikes, microcars and assisted gliders. The max sustained power that can be achieve using such “favor” is thus 42 kW when hooking 100 cells in series for delivering 350 volts under load.

Such architecture allows mounting two motors at the rear (and at the front also), individually managed.

Have a nice day

Please let us know when we can purchase aTeala cargo van with the 4680 cells ..
Until then we will really on the fools…

Looks like Chinese cost effective approach is pushing EU manufacturers to step up their game as well. Renault-Nissan-Mitsubishi (plus Dacia and Lada) Alliance published couple of weeks ago:

Renault also claims that the CMF-EV platform – along with the efficiencies enabled through the alliance – has enabled significant cost breakthroughs.
“We have achieved a 30% reduction on the platform cost. We have reduced the battery cost by 30% and the e-motor by 20%,” said Renault EV development director Jean-Paul Drai during a recent Automotive News Europe live conference.
That would result in Renault’s next generation of EVs being “very close to comparable vehicles with an internal combustion engine in total cost of ownership”, according to Drai.

If this is true, the next two SUV models Renault is preparing would be much more interesting for general public with predicted range around 500km than current Niro or Kona models. But what I am truly waiting is a new platform for sedan and saloon cars such as Megane and Leaf. This platform would than be used also for new Zoe and Micra as article suggests and would give a really good range on highway since sedans have much less drag. But with that cost reduction LG is probably selling/will be selling them cells for price under 100eur/kwh.

It looks as VAG and Alliance are currently the most serious EV developers in EU. PSA currently is only transforming ICE models into EVs which is not what feature holds for ZE cars while Jaguar Land Rover is just not in the production numbers to tackle markets seriously.