Nissan confirms that the 2019 Nissan Leaf e-Plus is coming

While this isn’t exactly a surprise, it’s nice to finally have a public confirmation from a Nissan employee.

This suggests that the 2019 Nissan Leaf will get the same powertrain made by LG Chem for the Hyundai Kona Electric.

Anyway, last year, I made a comparison table with what I expected to see in the Nissan Leaf e-Plus based on what Nissan employees have been saying behind closed doors.

Since the longer range version will finally get a TMS, I hope that Nissan changes its mind and implement it also in the standard version. Why is it so hard to admit that launching an electric car without a TMS was an error?! Without the above average battery degradation problems the Nissan Leaf is almost technically perfect – for its purposes -, it’s probably the most reliable car on market. Wasting time and money replacing all those degraded batteries on warranty doesn’t seem very sustainable. Furthermore, it creates the myth that all electric cars have battery problems.

I was glad that Nissan failed to sell the battery business to GSR Capital. GSR Capital is a Chinese private investment fund and I prefer that Nissan sells AESC to an already established battery cell maker, that can immediately use the facilities and start  producing batteries. An investment fund will probably gamble the facilities in the stock market without the intent to produce anything.

In my opinion, buying AESC facilities in Zama (Japan), Sunderland (UK) and Smyrna (USA) would be a great way for a Chinese battery cell maker, such as BYD or CATL to expand the battery production outside China.

One thing is certain, an automaker without its own battery cell production, that wants to mass produce electric cars shouldn’t rely on a single battery supplier.

We saw that EVTEC charged the Nissan Leaf e-Plus via CHAdeMO but it would be great if the European version moved to CCS, especially since Nissan Leaf and Renault Zoe will share a common platform in the future. Nissan Leaf should keep CHAdeMO only in Japan.

Lastly, the 2018 Nissan Leaf was first launched in Japan, then Europe and finally USA. However it would make sense if Nissan does the opposite with the 2019 Nissan Leaf, for three main reasons.

What do you think about the 2019 Nissan Leaf e-Plus? Is this finally a mainstream electric car without compromises (decent price, range, charging and availability)?

This is what I expected last year.
In my opinion there is no excuse for the current edition with the too small, thermally handicapped battery without fast charging.
My impression is that Nissan was planning on the NMC811, but when they did not became available in time, they used this battery as their plan B. But you could perhaps tell me if I’m wrong.

Anyway, the rumor is that there will also be a LG-Chem 48kWh version with TMS. Do you have any info on that?

I have no info about that possible LG Chem 48 kWh battery.
–
For me what would make sense would be to build battery packs with LG Chem and AESC battery cells to increase production. Having only one battery cell supplier is a mistake for an automaker that mass produces electric cars.
–
Currently LG Chem pouch cells are 60-64 Ah while AESC are 56,3 Ah, if AESC managed to make the cells with similar size and capacity to LG Chem, Nissan could easily use both suppliers to produce equivalent battery packs.
–
They could use 192 (96s2p) cells in the standard version, and 288 (96s3p) cells in the longer range version. Or better yet would be to increase the voltage by using 200s2p and 300s3p.
–
Nonetheless, there’s no one stopping Nissan from using TMS with AESC cells. The Nissan e-NV200 is an example of this.

I wouldn’t be happy to get a “TMS” like the one in the e-NV200. That is an air-based cooling system, not liquid cooling.

Air has very limited cooling capacity compared to liquid and I am pretty sure that cooling uniformity is an issue too (meaning that cells are cooled to a different extent thus degrade differently).

Teslas and the Bolt have high-capacity and very uniformly cooling TMSes and I think Nissan should not provide anything less.

On that note, someone at nissanleafpt forum was saying that having an air cooled TMS in the Leaf would probably be worse because it would probably create a unbalanced temperature on the cells. In other words, different cells would have different temperatures due to the airflow not reaching all the cells the same way and that led to instability. What do you think about that?
If you want you can read the topic at: https://www.nissanleafpt.com/viewtopic.php?f=9&t=7317

It’s a fair critic, but I don’t think that electric cars with air-cooling have higher degradation problems than the Nissan Leaf.
–
Nonetheless, unbalanced temperature is a real problem, that’s why I don’t like the battery pack configuration of the Nissan Leaf, it has some cells side-by-side – as it should be – but most cells are on top of each other, where the cells on the top get hotter.
–
This is a bad example:
–
This is a good example: 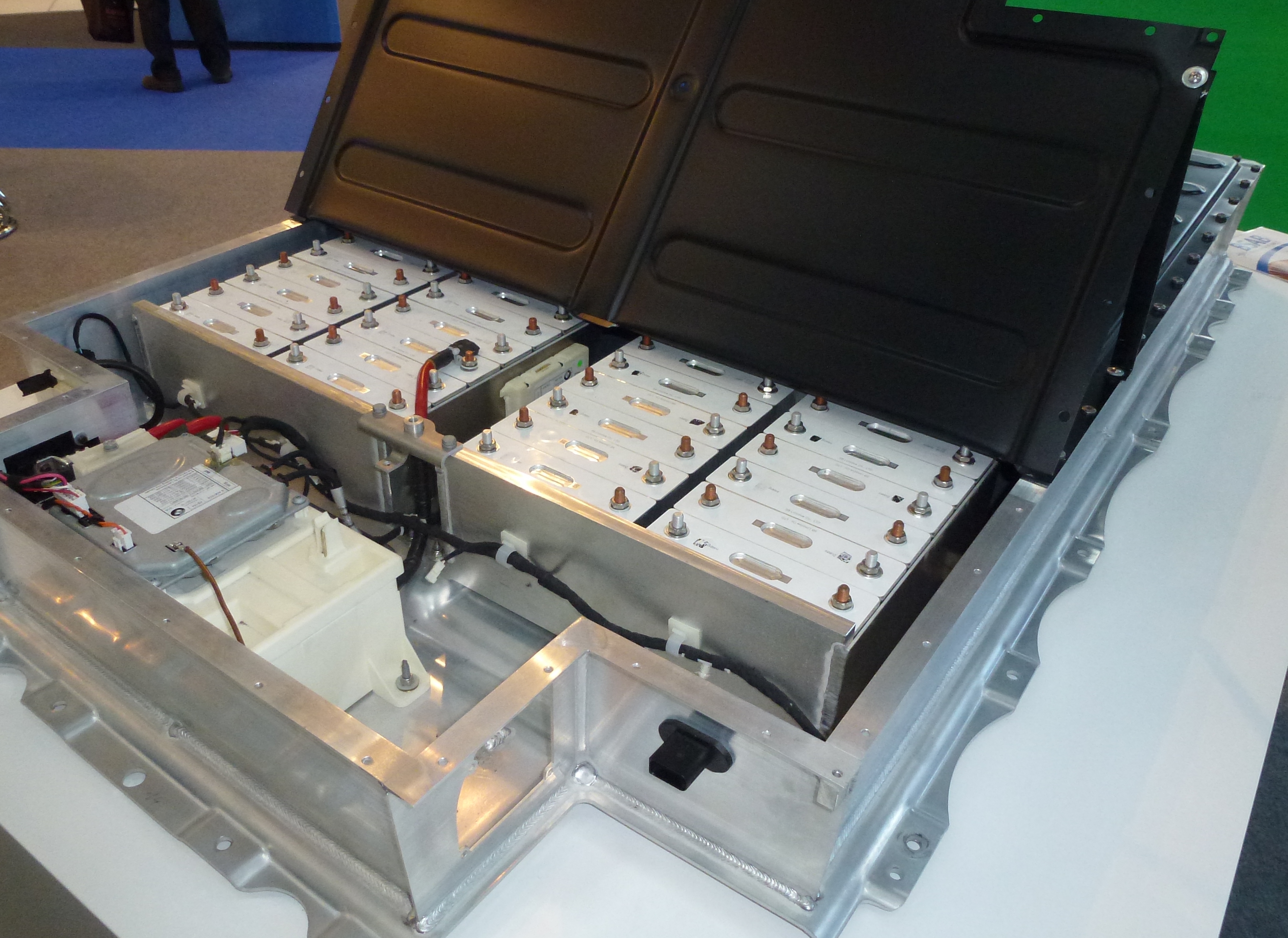 –
The Renault Fluence ZE had the same AESC battery cells as the Nissan Leaf mk1 but even worse degradation, due to the battery cell disposition that prevented decent heat dissipation.
–
http://insideevs.com/wp-content/uploads/2014/03/111.jpg
–
The Renault Fluence ZE is the only electric car with worse battery degradation than the Nissan Leaf.
–
In battery packs, battery cells should always be side-by-side for better passive cooling and less temperature unbalance.

Yes, it is finally a mainstream electric car without compromises IF it gets 100+ kW CCS support, as you suggest.
I see some 100 or 150 kW CCS chargers in Europe on the rise, but no CHAdeMO 100+ kW chargers.

Without CCS, those 102 kW are only “on paper”, but in reality the car is just another Chevrolet Bolt. A nice EV, but on long roadtrips these 50 kW take too long to charge a 64 kWh battery.
54 minutes for a 0-80% charge that give you (realistically, at motorway speeds) some 150 miles (240 km) additional range? Two hours driving, but then one hour charging? That’s taking too long.
Then it’s just another failed Tesla Model 3 competitor.

Let’s face it, Tesla and Supercharger Network set the standards.
If the Leaf is available in the beginning of 2019, but the 35k standard Model 3 just 6-9 month later, Leaf will fail it’s goal. It’s sales will prosper just on the lack of Model 3’s availability. Eventually Tesla will keep up and then – what?
They should do it now or face consequences.

Even now Leafs prosper only because of the lack of availability of Hyundai EVs.

The Model 3 still has the advantage of the Supercharger network, 120 KW at every location and lots of chargers at every location. Currently there are more Superchargers in my country (Denmark) than there are 100+ KW CCS chargers and that is only in my country.
I really think the EU should do something about how we pay for charging, every operator uses his own charging cards and you have to have a separate card for every operator. Paying for gas is much simpler, I can pay for gas with my credit card regardless of which country I am in.

One big disadvantage I see with the Tesla is the practically non-existing service network where I live (Hungary).

Nissan has a decent service network with properly trained mechanics for the Leaf.

Q: What do you think about the 2019 Nissan Leaf e-Plus? Is this finally a mainstream electric car without compromises?

Answer is: it is 2010 design tweak to look like 2018, very cheap build, almost like mimic to other established EV’s or whanabee that promises a lot but under delivers and is like a joke compared to what can be bought from Hyundai/Kia. Mainstream Leaf was 2011, 2019 it will be a carbon copy of all other electric cars like Bolt, Kona EV, Niro EV etc. on the paper but in reality as I said before ground design was made 2010, it feels like 2010, it drives like 2010… Leaf 2019 needs thinking out of the box and complete redesign to be able to achieve efficiency, comfort and attraction.
I owned Leaf24, Leaf30 and I bought Leaf 2018 direct after presentation, got it March 2018, then sold my Leaf 2 Zero early May 2018 due to lack of competence, attraction and comfort… Leaf had become biggest electrified “Joke” not “Juke” 

I’m a taxi driver in Italy.
I’m a Hunday Iqoniq Electric owner.
I think the New Leaf plus it will be a car without compromis!!!
the Hunday Iqoniq is already a great car. With an average consumption of 10.6kwh / 100km from February to today on a distance of 35.000km charge in DC about 400km / h. The new Leaf at 100kw loads about 600km / h so a big step forward. The real distance will range between 300 and 500km (with Ioniq are now between 180 and 290km) so a huge step forward. If then the dimensions will be slightly higher than the current especially as regards the trunk for me it will be perfect !!!

If the price is kept relatively close to the 40kwh version, as you’re saying, the e-plus might move to the front for replacing my 2017 Leaf. It’ll be a fully all round practical EV. Its main competition looks like it’ll be the Niro EV, and I’ll probably decide based on which one I think is best for towing a small trailer, and then price and availability. The towing part means it becomes almost as practical as a minivan, so I’d no longer have to rent vans for business or camping trips.

The only thing that might knock it off the top spot would be if someone produces a station wagon EV or a good not too expensive SUV format EV within the next 2 years.

So I’ll be eagerly watching for the Canadian prices of the Niro and the e-plus.

“This suggests that the 2019 Nissan Leaf will get the same powertrain made by LG Chem for the Hyundai Kona Electric.”

The 150 kW motor might be the same as the one in the Chevrolet Bolt EV and Hyundai Kona Electric. However at this time, it’s just a possibility.
–
We do know that LG Chem offers better prices for clients that buy the complete package.

Why is the Tesla model 3 shown in the chart at $35k when the cheapest deliverable model is nearly $60k, the base model isn’t even available until ???

Yes, the $35k Model 3 is not available yet, but who knows how long you will have to wait for the Leaf e-Plus?

Probably less than 6 months for the release of the 60kWh Leaf, so it will arrive sooner in Europe than the Model 3.

Another great post Pedro, thank you and keep up the amazing work!

I came today to the dealer for the 9 month free check on my 2018 leaf and saw the leaflet for a Leaf Nismo already seems to be available. Apart of the styling and sportier suspensions/tires. There is a graph with the acceleration pattern between the regular Leaf and the Nismo. They also show a picture of an exclusive tuning computing board for the Nismo Leaf.

Chances are the e-plus LEAf will be unveiled at the LA auto show.