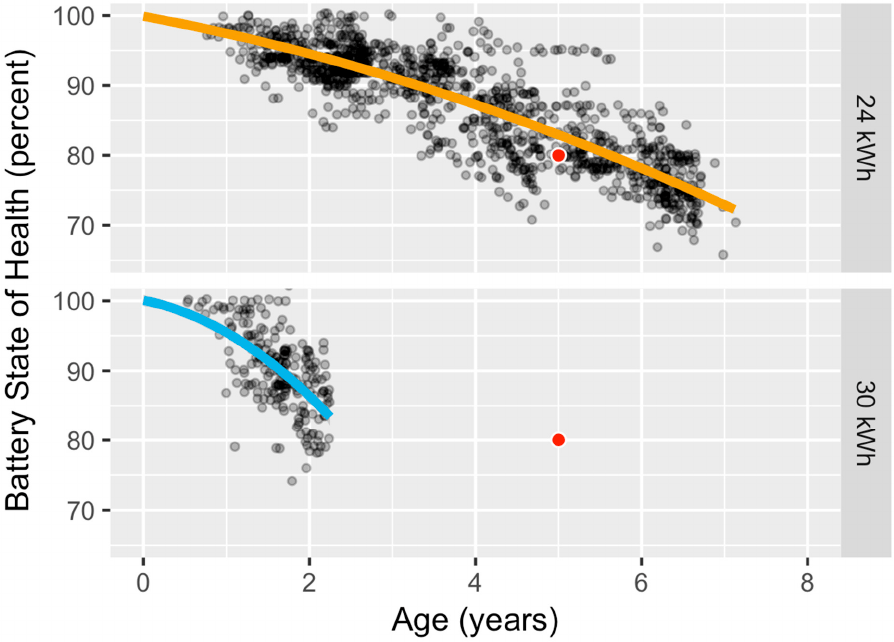 The measurements were made by using a OBD2 scanner with the Leaf Spy app.

The study has some interesting conclusions and I recommend you to read it (only 14 pages), but in this article I’ll focus on one:

Why are 30 kWh batteries more affected by charge/discharge cycles?

It’s not surprising that the 30 kWh versions suffer more from charge/discharge cycles, since they are more often charged to 100 %. Remember that the option to limit the charge to 80 % was removed when the 2014 model year debuted (to game EPA range ratings). This means that none Nissan Leaf with the 30 kWh battery has this option.

If you want to improve your electric car battery lifespan, you should know that it’s better to charge to 80 % and discharge till 0 % than to charge to 100 % and discharge to 20 %. Nonetheless, if you can use the battery between a SoC (State of Charge) of 80 and 20 % even better… And if you really want to take care of your battery, try to use it only between 70 and 20 %.

Why are 24 kWh batteries more affected by time?

It’s also not surprising that the 24 kWh versions are more affected by time and older Leafs show much higher degradation levels, since the “lizard” battery only arrived in 2014 with the 2015 Nissan Leaf.

While the “lizard” battery cells remained with LMO cathodes, they had the electrolyte improved to be more heat tolerant. Only in 2016, Nissan finally started using NCM cathodes in their battery cells with the introduction of the 30 kWh battery version.

Anyway, I think that this information is important if you plan to buy an used Nissan Leaf. Choose wisely.

Thanks “Leaf Owner” for the heads up!