Renault electric superminis will be a lot cheaper in 2020

Gilles Normand is since 1 January 2017, Senior Vice President, Electric Vehicle of Groupe Renault. Gilles is well aware that Europeans love superminis and electric cars are the future. This combination of facts make obvious that more affordable electric superminis are essential for any automaker that wants to be successful in Europe.

When will it happen? Only in 2020 of course, not because current battery technology isn’t good enough but because tougher emissions standards and motivation aren’t there yet…

According to Auto Express, Gilles who spoke at FT Future of the Car Summit said the following:

“There’s now a huge amount of money being invested by OEMs and by suppliers, tier one suppliers. This will bring further technology breakthroughs in battery tech. And then it’ll further help sales, because it’ll be more affordable.

So we mustn’t forget that the prices of combustion-engine cars will go up, and EV prices will come down. If you go for B-segment [cars like the Ford Fiesta], by early next decade we consider the prices of EVs will be on par with combustion-engined cars. With the C-segment [cars like the VW Golf], it’ll be the middle of the next decade. And in industry terms, the year 2020 is like tomorrow morning at 8am, right? And this will be another trigger point for more and more adoption.”

Gilles Normand also noted that sales of the best selling electric car in Europe, the Renault ZOE, had a 90 % increase between 2016 and 2017, thanks to the introduction of the new ZE 40 battery, which gives the ZOE more range. Furthermore let’s not forget that is now possible to officially buy the Renault Zoe with battery included, if we want to avoid the monthly rental – at least for customers outside France. This fact also helped to boost sales.

I’ve no doubts that the current battery technology in terms of energy density and cost, is more than capable to make appealing electric superminis price competitive with ICE (Internal Combustion Engine) cars. Even Satoshi Ogiso, former chief designer of the Toyota Prius, admitted so.

Nevertheless, I tend to look at the positive side of things, and 2020 isn’t very far away…

More than journalists, suppliers have to know about their clients plans in advance, in this case, we just need to look to battery cell makers movements if we want to know what automakers are planning for electric cars.

Later this year LG Chem battery cell plant in Europe (Poland) will start production. While Samsung SDI plant also in Europe (Hungary) will start operating in 2018. Both these important openings make me believe that in Europe by 2019, electric cars will be produced in very high numbers (by today’s standards of course).

I understand automakers such as Toyota that invested large sums in hybrid technology want to “milk the cow” and delay the electric car movement, however everyone else should go straight to fully electric cars as soon as possible. Doesn’t make much sense now start investing in technology that will be obsolete in 3 years.

Ok, now that’s settled that automakers will sell more affordable electric cars in 2020, how good will they be?

Remember the famous lecture in 2015 about Renault Zoe’s evolution? 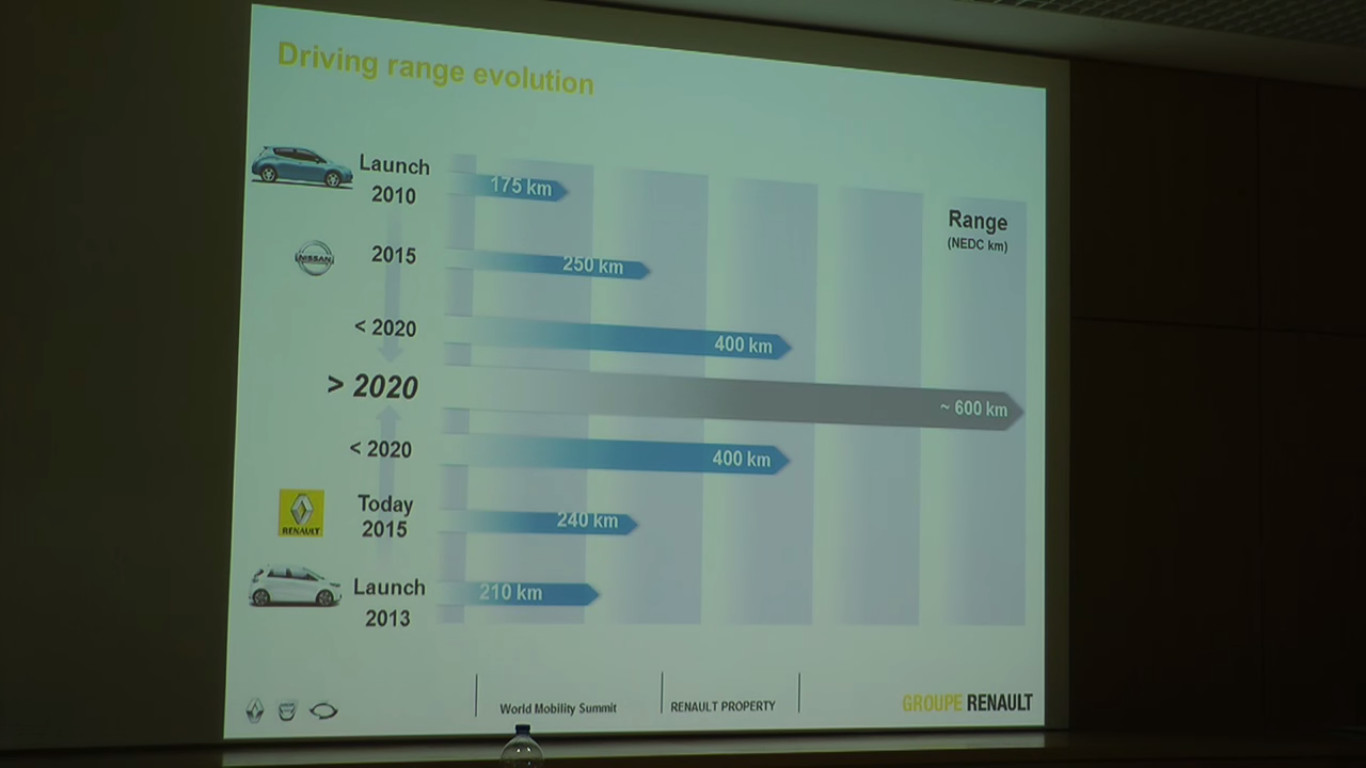 In 2020, not only the Renault Zoe will be similarly priced with the Clio, it’s also expected to be a lot better than the current generation.

The NEDC range will increase from 400 to 600 km, probably by a 60 kWh battery. Yet, this figure could also be reached with a smaller battery capacity if Renault decides to make the Zoe more aerodynamic. Remember the Eolab concept with its amazing drag coefficient of 0,235? I hope that Renault goes with the second option…

The Zoe will not only be able to charge the battery with the very useful 22 kW internal charger, but also by DC fast chargers through the CCS protocol with a 100-150 kW rate.

How about you? Do you have doubts that by 2020, cars that aren’t electric will look like dinosaurs? Great to see in museums but not on the roads…

There’s no turning back now.

LG Chem and Samsung SDI are now building their battery plants in Europe for a reason. Obviously they wouldn’t do it without signed contracts.

Why wait? The technology is now good enough! My wife and myself are driving electric cars.
The old engines are like urinate in our fresh water; like in medieval times.

I suspect all superminis (with ~4 m. length) have a bad drag coefficient due his flat back.
Sedans have always better Cx.

It’s more difficult to improve the aerodynamics of shorter cars, yet it’s possible. The Eolab concept proves it.

A Renault Eolab ZE would be even more efficient than the longer Hyundai IONIQ Electric.

ZOE is an excellent car and I fully agree increasing the NEDC range from 400 to 600 km is essential (not everyone owns a garage that can be used to charge the car each evening) and fully agree that the EOLAB concept to reduce weight and drag is better than increasing battery size. Remember, if we plan for success there will be thousands of ZOEs in our towns and cities, and if their batteries are too big, and the electricity network will not be able to cope. Lets not repeat the errors of the petrol/diesel cars that are way to heavy and powerful. To close the gap between EV and petrol/diesel cars the European EV industry (and private citizens) should lobby the European Government to impose a mandatory maximum 130 km/hr speed regulator (like the 90 km/hr on trucks). This would make it pointless to continue to make high powered petrol/diesel and EV cars (To reduce green house gas emissions a high powered Tesla Sports car is not the answer…), would make our roads safer, reduce congestion (traffic flow is smoother if all cars are travelling at roughly the same speed), and instead of setting radar traps on our auto-routes, precious police resources could do other important duties.

I’ve been considering the Zoe and the ForTwo. I prefer the original design and the interior of the ForTwo, but I abhor its.comparatively high price and dismal range. While I don’t need the more spacious Zoe, its price and range are very attractive. I’m going to wait for Renault’s next generation before making any decision. By then, I just might opt for no car at all; I live in a European city that is doing its damndest to make cars obsolete with less and less parking, more pedestrian areas, more bike lanes, more public transportation like hybrid and electric buses, and ride-sharing schemes ala self-driving Smart EQs. If I want to go on a trip outside of the city, I can always rent a car. The savings on buying a car, upkeep and fuel and insurance, sure is tempting. But I’ve been driving for more than 60 years, and it’s not easy for old dogs to learn new tricks.