Last month, Opel CEO, Karl-Thomas Neumann told the world that the first units of the long-awaited Opel Ampera-e will be delivered to Norwegian customers in May.

I am happy to confirm that we will start delivering the #AMPERAe to customers in Norway in May already. #GIMS2017 #GimsSwiss pic.twitter.com/9RX7xMGlRL

Today, the first 10 units were registered in Jessheim, Norway. As a curiosity, all of them are blue.

Now that Opel/Vauxhall is joining the PSA Group, there is an uncertainty on how many Opel Ampera-e units will GM produce for Europe. Nevertheless, it’s obvious that this electric car is much better suited for European tastes, than it is for North Americans. With low sales figures for the Chevrolet Bolt EV in the USA, it’s clear that Chevrolet prefers to sell the plug-in hybrid Volt, which is available nationwide in that country.

While very different electric cars, both Chevrolet Bolt EV/Opel Ampera-e and the Hyundai IONIQ Electric share the same problem. They are production constrained and their makers don’t realize the gems they have in their hands. In both cases, GM and Hyundai prefer to sell hybrids as their eco-friendly cars. Maybe the arrival of the Tesla Model 3 and the new generation Nissan Leaf later this year is what GM and Hyundai need to wake up and increase production.

What do you think? Will the Opel Ampera-e be more successful in Europe than the Chevrolet Bolt EV will be in the USA? When will GM significantly increase production?

A reliable eye witness saw a GREY Ampera-e yesterday, has there been a mistake in the registration database?? Stay tuned!

Many years ago I drove a car that said diesel in the registration but it was a petrol car and had always been one, they don’t always get it right 😉 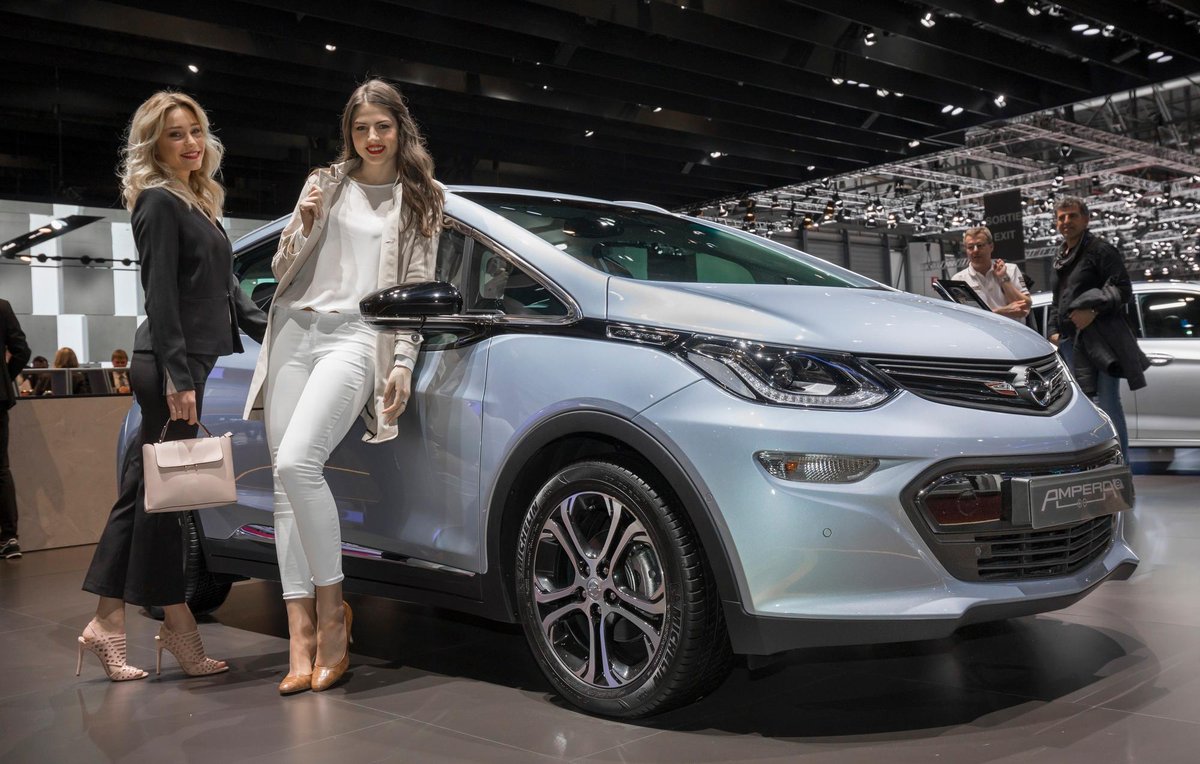 In some cases grey and blue are very similar colors, just look at the sky in the article first picture.

Yeah, I think the color spotted was called Sky Silver, not Quantum Grey, so there is definitely some blue in there. (even though a car can be registered as silver color in Norway)

What i think is that the Ampera-e is just a compliance car and nothing more. GM has no intention to make it successful.

And you base this statement on what?

On the production numbers, on the fact that on the beginning they told they would be selling them all across the US (the Bolt) and then limited it to some states…

And if there were any doubts that the Bolt is just a compliance car:

Jonas, you are wrong!! GM has an agreement with Opel to supply all the Ampera-E that they can sell! So if they need to sell 40,000 Ampera-e BEVs in 2018, GM can produce them.

I expect the Ampera-e in Norway to be supply constrained for all of this year and maybe the next as well. Demand will be higher in Europe than in the US, but whether it translates into higher sales depends of course on how many are made available and how aggressively or not they are priced in different European markets. The potential is there, but what GM actually wants is less clear.

With the news that Trump is cutting the emissions testing budget of the EPA by 99% several makers may feel they can drag their feet a while longer. Making a low volume model still is enough to gain useful experience for when EVs become commercially relevant, and also to use as an image booster when they wish to focus on how green they are (while selling car, far more SUVs and trucks, of course).

Still, things are progressing fast. By the end of the year several models offer double the range or more compared to what was considered decent in 2016. In 2018 the selection expands again, and 200-milers will get a little cheaper. Much the same for 2019. But in 2020 we’ll see another “leap year” more like this one, with a barrage of models and few manufacturers without an EV on offer.

We all would love to see change happen faster. But considering the progress made in the ten years from 2010 (basically no useful EVs available, possibly except the Think!) to 2020 (EVs well on their way to mainstream adoption, I believe) I think it’s actually a revolution. And compared to how cars changed in the decade before that, clearly we’re moving at breakneck speed. 2020 to 2025 will likely see as much change again, as the pace seems to be forever increasing.

The Bolt, regardless what GM intended, is playing its part in speeding up the revolution!

This statement is wrong:” But considering the progress made in the ten years from 2010 (basically no useful EVs available, possibly except the Think!) ” because in December 2010 there two EVs on sale: the Nissan Leaf and the Chevrolet Volt.