Why battery makers should sell EVs?

BYD (Build Your Dreams) is major Chinese manufacturer of rechargeable batteries, mainly for phones and tablets. But they soon realised they could use their long lasting LiFePO4 cells in electric cars and buses to gain visibility, so they started building and selling them.

BYD Auto focus in electric cars started with taxis and electric buses for public transportation, now they are selling plug-in hybrids for personal use.

But what I suggest is not exactly the same strategy, specially if the battery manufacturer main focus is selling batteries to automakers and not building cars themselves.

What I do suggest is that every battery maker build and sell an electric car to demonstrate the technology and advertise their batteries.

One small, aerodynamic, light, efficient and affordable electric car like Opel Rak-e or Volkswagen Nils would be ideal for this task. Since they are so efficient they wouldn’t require a big battery. Remember the purpose is to advertise and sell the lithium cells, it’s not to use them all. 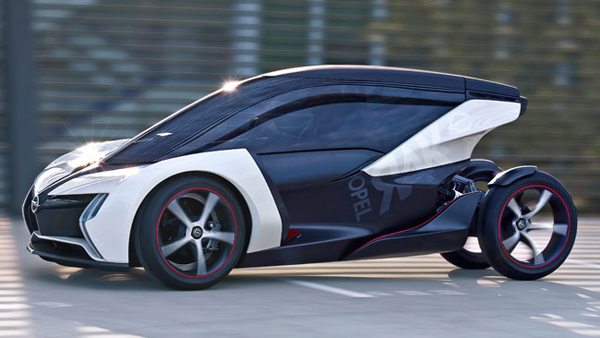 I really love these two concept electric cars, they would be excellent commuter cars. All tech magazines, blogs, social media would talk about them, meaning free adversing just like Tesla Motors experienced. But as much I like these two, they are just examples of the kind of car I think it would be ideal for a battery maker to promote its technology.

A small 8-10 kWh battery would be enough for decent range, since these tandem electric cars are so efficient. And as energy density of the cells improves, the battery capacity and range of the car would increase.

I really think this would be a great idea, use a small proportion of cell’s production in one small, yet disruptive electric car to promote the technology and then sell the majority of the cell’s production to electric cars manufacturers that require big batteries for SUVs, trucks, buses or simple passenger cars.

The electric car used for technology promotion should demonstrate important lithium cell’s characteristics like affordability,  fast charging, durability and efficiency. It would be mainly targeted to younger generations and cost no more than 10.000 € or 15.000 € for the highest trim. Younger generations would be left with the role to introduce the new technology to older generations.

What do you think we will see first? Samsung SDI, LG Chem, Toshiba SCiB or Panasonic branded electric car?

We already see Samsung selling vacuum cleaners, so why not an electric car? 🙂